Each place we’ve visited in Mexico – from the wild coast of Baja California to the solitary Sonoran desert, from the tropical Nayarit coast to the bustling metropolis of Mexico City – has been remarkable in its own way.

Chiapas, however, stands apart from the rest. From its Mayan history to its enduring indigenous communities, and from its natural beauty to its gastronomic delights, the state of Chiapas is the epicenter of all things that make Mexico great.

Tres generaciónes of Slobes (me, Brian, our daughter Maya and Grandpa Slobe) recently spent two weeks exploring Chiapas over the winter holidays. I think I can safely say we were all blown away by the richness and diversity of the sights and experiences to be had. It could be my favorite place in Mexico so far. To do this state justice, I’ve broken this blog post into two parts: 1) In and around San Cristóbal de las Casas and 2) La Ruta Maya. This first post will cover in and around San Cristóbal.

Before I dig in, it will probably help to orient you to where Chiapas is and the route we traveled.

Here is a zoomed out map of Mexico and Central America. Chiapas is the southernmost state of Mexico, sharing much of its eastern border with Guatemala: 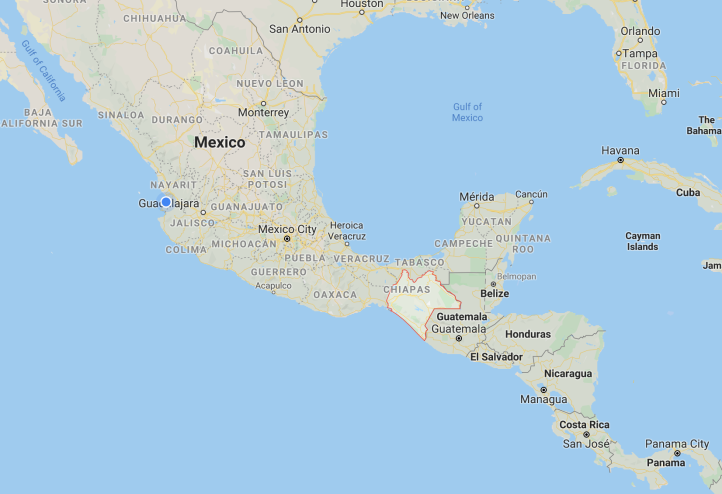 The route we took had us flying into the capital city of Tuxtla Guitiérrez. From there, we headed to Chiapa de Corzo – the launching spot for visiting the Sumidero Canyon. We then spent four days in the town of San Cristóbal de Las Casas. After, we traveled northeast and along the Guatemalan border, visiting the Mayan ruin sites of Toniná, Palenque, Bonampak, and Yaxchilán, and exploring the Lacandón jungle and Montes Azules, which are home to countless breathtaking waterfalls, rivers, lakes, and cenotes. We spent nine days along this loop of ruins and jungle before heading back to San Cristóbal for a few more days before flying home.

Here’s a map showing our route:

In this post, I’ll be covering these areas in and around San Cristóbal:

We spent our first day in Chiapas exploring the impressive Sumidero Canyon, an 8-mile stretch of the Grijalva River that has carved out a massive gorge from the surrounding geography. This section of river is flanked by towering cliff walls – some as high as 3,300 feet – and surrounded by tropical rainforest.

If you are lucky (we were), you might glimpse a group of spider monkeys in the trees or crocodiles sunning themselves on the riverbank. 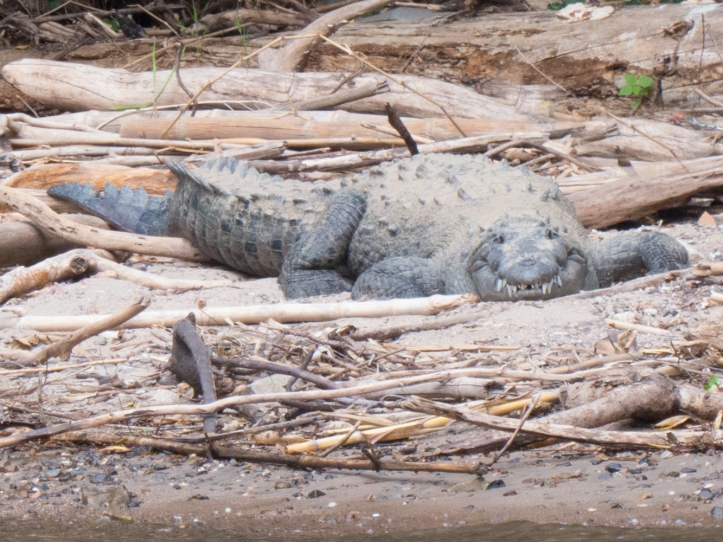 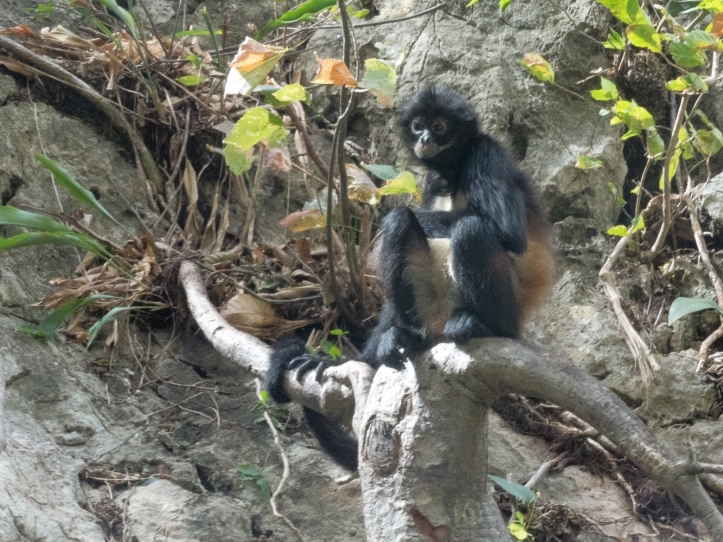 You can explore the canyon by boat or from the five overlooks along the mountainside above the gorge. We did both – first driving up the mountain and stopping at each of the viewpoints to see the many twists and turns of the river from up high, then taking a 3-hour boat tour through the canyon.

The boat tour is well worth the trip. You feel like a speck of flotsam compared to the enormity of the cliff walls around you.

Along the way, you can see strange and wonderful caves and rock formations, such as a stalactite in the shape of a seahorse, and the “Christmas Tree” – descending layers of moss-covered rock shelves hanging from a cliff wall that truly looks like a Christmas tree. 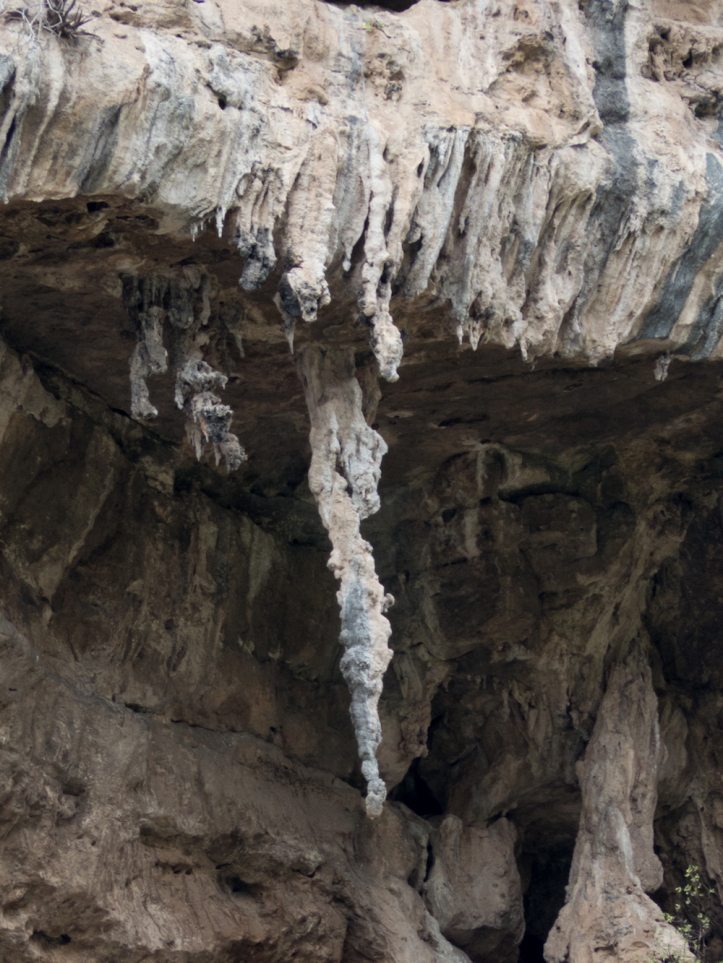 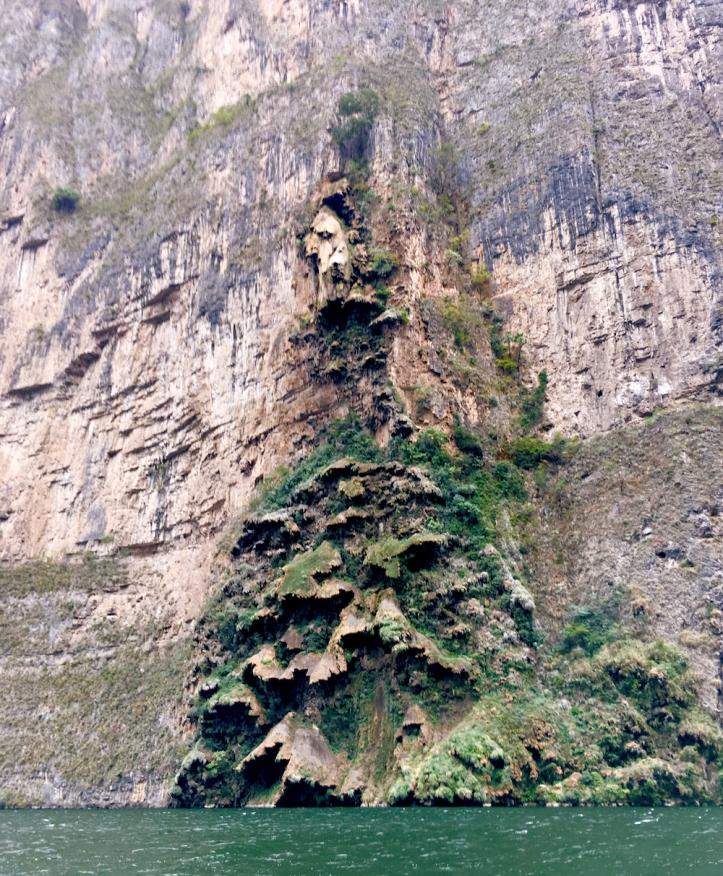 We were fortunate to visit the canyon when we did because a week later there was a landslide (no one was hurt) that closed down the boat tours for a day! The landslide would be just one of the seismic events (more on that in blog post #2) that happened during our tour of Chiapas that confirmed we were in the epicenter of someplace magical.

After our visit to the Sumidero Canyon, we made our way up to San Cristóbal de las Casas – the former capital city of Chiapas and the cultural center of the state. The town is set in a mountainous valley at 7,200 feet in elevation, giving it a totally different climate and ecosystem than the rest of Chiapas. It is much cooler in San Cristóbal than any other place in the state, and we definitely needed our long pants and jackets.

We stayed in an Airbnb near the center of town within walking distance to the main plaza, cathedral, and zócolo. Strolling around the central historic district our first evening, I was struck by the beauty and vibrancy of the street scene and architecture. San Cristóbal has a European flair, yet it still retains its Mayan roots. 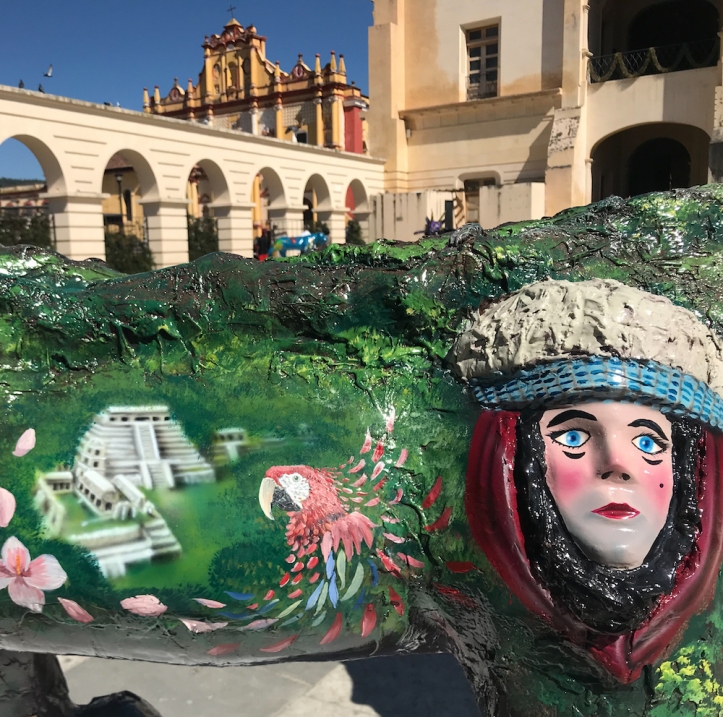 Outside the former Spanish haciendas, casitas and other colonial-era structures that lined each street were throngs of people selling all sorts of delicious treats and indigenous handicrafts and textiles. Tucked inside the buildings were hip hotels, restaurants, art galleries and secret gardens. Hotels and shops carry the names of Mayan kings and gods, restaurants serve up modern renditions of native Chiapanecan foods, signs are written in Spanish and Tzeltal – one of the estimated 56 indigenous languages still spoken in Chiapas and one of the largest indigenous populations in the state.

Being the food lovers we are, we had to start our tour of Chiapas through its cuisine. Our first day in town, we took a cooking class from El Tzitz cooking school, and before we got started in the kitchen, we took a tour of the bustling central market and sampled all sorts of foods, herbs and spices that were new to me – such as achiote, chipilín, pinole, and simojovel chiles – and bought all fresh food to create our meal.

We made several traditional Chiapanecan dishes – chalupas (a type of tostada), sopa de chipilín (corn soup with chipilín greens and maize dumplings), and azado coleto (pork in an ancho chile sauce). Everything was so delicious! (Email me and I’ll send you the recipes.) 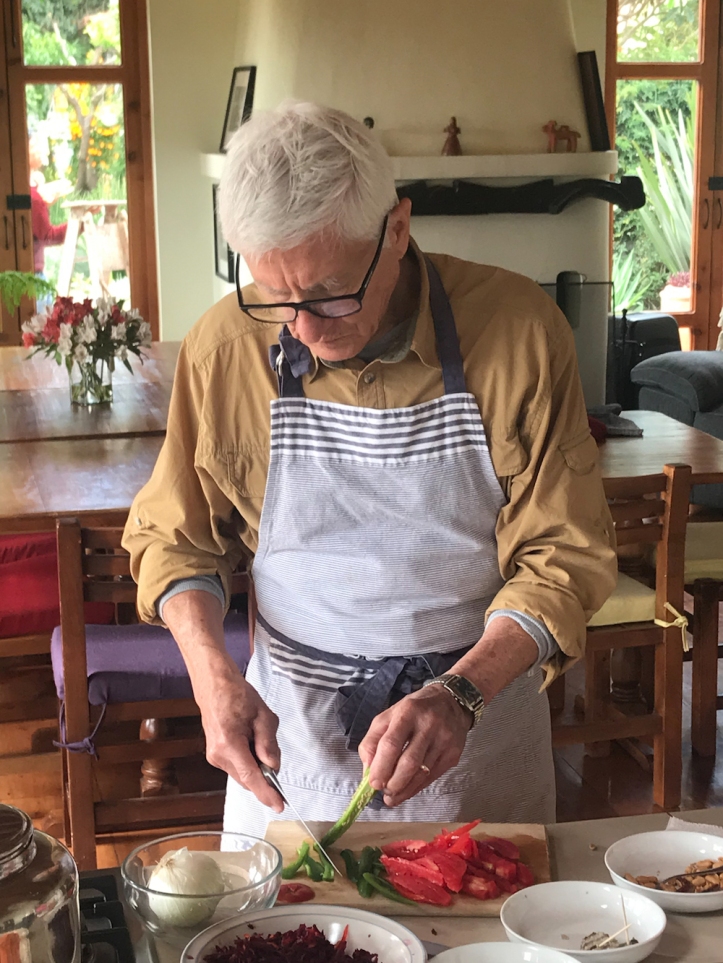 Our gastronomic tour did not end there. Throughout our time in San Cristóbal, we hit as many top-rated Chiapanecan restaurants as we could (see list below), and I brought home several bags of spices and chiles that I’m excited to play with in my own kitchen. (In fact, as I’m writing this, I’m munching on fried simojovel chilies, garlic, peanuts, and salt – a spicy snack we had at our cooking class.)

For me, the big attraction of San Cristóbal was simply wandering the streets and seeing what we discovered. This is basically how we found STEPS – out on an evening wander. STEPS is a non-profit organization that is working to capture the oral stories passed down from generation to generation within the different indigenous communities in the area, and create children’s books translated into Spanish to help preserve indigenous culture, as well as bring Spanish-language learning to indigenous kids without access to schools. We spent an evening with one of the indigenous storytellers and learned a ton about Mayan rituals, gods and language. It was a good primer for our visit to the neighboring indigenous communities of Chamula and Zinacantán.

Chiapas has one of the largest indigenous populations in Mexico, with nearly a third of the population either descendants or current members of an indigenous Mayan community. Many of these communities have held firm to their culture and customs despite centuries of colonialism and Mexican governance. Two of these communities – Chamula and Zinacantán – are situated just outside of San Cristóbal and graciously allow foreigners to visit.

We hired an indigenous guide to take us to visit the two communities. Victor’s father is Chamulan and his mother is from Zinacantán. He is an elementary school teacher by profession and leads private tour groups around the two communities during the school holidays. It was incredible to learn about these two cultures from someone who grew up in them. Victor taught us so much – like how farmers and hunters would ask permission from their gods before sowing the ground and before killing and consuming an animal, how people would cleanse themselves of evil spirits by brushing down their bodies with leafy branches, and how you could tell the social status of a Zinacantán person by the number of flowers on their clothes. He also walked us through what happens during a traditional Mayan ritual, and later we were fortunate to witness one in the church of Chamula.

“Church” is probably a misnomer. While the church in Chamula might have been commissioned by the Spanish (but likely built by the hands of indigenous people), and from the outside looks like a traditional 16th-century church, it is purely Chamulan inside. Since foreigners are not allowed to take photos of the inside of the church (and personally, I am glad they can’t), I will describe what I saw and how it impacted me.

This was like no church I’ve entered before. There are no pews, no statues or paintings of bleeding Jesus on the cross, no elaborate chandeliers or stained glass. The floor was strewn with pine needles. Amid the pine needles and at various places along the floor were rows of candles, lined up front to back from shortest to tallest – like you would line up for a group photo. Some of these groupings of candles had already burned to the ground, others were just being set up. In front of each arrangement of candles were gatherings of families sitting on the floor or standing together, along with their curadora (healer), who was performing a ritual to communicate with saints, gods or spirits of lost family members and friends on behalf of the family. The curadoras spoke in their native language and used ritual objects such as eggs, leafy branches, copal, pox (a distilled corn alcohol) and a live chicken or rooster. We watched as one curadora called to the spirit of a family’s lost father (Victor interpreted what we were seeing), and used each object – circling them around her body, the candles, and clothing of the lost man. She then handed the rooster to a male family member who sacrificed it by twisting its neck. When that was done, she and everyone had a taste of pox.

For me, witnessing this ritual was cathartic and healing. I can’t tell you how many times I’ve walked into a church and felt overwhelmed and even frightened by the opulence and bloody biblical imagery. As a Jew, I’ve always felt out of place in churches. So standing there inside the church of Chamula, witnessing this ritual, I felt a sense of peace and solidarity with this community that had held onto its traditions despite centuries of oppression. Having to observe one’s religion within the walls of the dominant culture’s house of worship is something I am all too familiar with. Growing up in Laguna Hills, California in the 1980s, where Jews were the minority, our congregation met in a church since we didn’t have the means or strength in numbers to build our own synagogue at the time. So, in that moment, all I was thinking was, “I feel you Chamulans.”

Later, we visited a women’s weaving collaborative in Zinacantán where we got to see women at the loom, creating beautiful, flower-filled textiles that are turned into blouses, skirts, belts, dresses and more. Both the men and women of this community still wear their traditional flowered clothing, and we were lucky to be allowed to try on these beautiful clothes.

Throughout our travels around Chiapas, we saw similarly vibrant, hand-woven clothes and textiles for sale at outdoor markets, shops and tourist attractions. If you have a weakness for beautiful, colorful clothing, Chiapas is your place!

I hope you enjoyed this post and it gets you thinking about a possible visit to San Cristóbal de las Casas and surrounding areas. In my next post, I will share our adventures along the Ruta Maya.

In the meantime, here’s a list of recommended restaurants and such if you do find yourself in San Cristóbal one day:

Other treats not to miss: