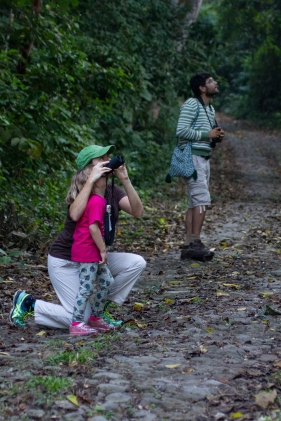 We woke before dawn and drove through the darkness to La Palma – a tiny puebla on the outskirts of San Blas. Beyond La Palma, we climbed a rocky dirt road leading into the jungle – the same road, “El Camino Real,” that many years ago served as the main route between Mexico City and San Blas. We all got out of the car – me, my husband Brian, Tonio (our birding partner for the day), and my 4 ½ year-old daughter, Maya. Although it was my first Christmas Bird Count, something was telling me I had been in this place before. Then it dawned on me. Exactly five years ago, I was birding in this same location with expert birder Luis Morales from the San Pancho Bird Observatory. I was 6 months pregnant with Maya then. Now there we were, in the same spot, birding together for the first time.

Our location that morning – La Bajada – was one of 24 different sections of the 2016 San Blas Christmas Bird Count, meticulously organized by Mark Stackhouse. Mark is a veteran birder and birding guide who moved to San Blas from Salt Lake City in 2007. Describing Mark as an avid birder is a bit of an understatement. He began birding before he could even read. When he was just 16 years old, he guided his first professional birding trip at the now-famous Magee Marsh in Oak Harbor, Ohio. Since then, he has guided all over the Western U.S., Mexico and Central and South America. He currently holds the record for the most number of bird species counted in a 24-hour period in Mexico (273). During last year’s San Blas CBC, his rag-tag team of less than two dozen birders came in 10th in the world in the total number of species counted (285), and racked up the second highest species count in the 43-year history of the San Blas CBC. (The number one count was in 1983 when a team of 50 expert birders from the U.S. found 292 species).

Mark had assembled yet another motley crew of expert (and novice, if you count my family) birders for this year’s count: There was 14-year-old Dessi Sieburth, the 2015 American Birding Association Young Birder of the Year, Logan Kahle, a biology undergrad from Cornell University, John Sterling, one of the original members of the 1983 San Blas CBC team, and several local Mexican birders, including our partner, Jose Antonio Robles (Tonio), a San Blas native, avid birder and eco-tourism student from Tepic, Nayarit’s capital city. All in all, there were 22 of us – half from the U.S. and Canada, and half from Mexico – poised and ready to hopefully spot the 300+ species that inhabit a 15-mile radius around San Blas.

San Blas is one the most famous birding locations in all of Mexico and perhaps all of North America. It is a world class place for birding because there are so many different types of habitat in a small area: open ocean, beaches, freshwater wetlands, saltwater wetlands, mangrove swamps, lowland jungles, agricultural fields, orchards, tropical forest, riparian, and more. Says Stackhouse, “If you know about birds, you know about San Blas.” San Blas also happens to be among the many important bird areas within SJV’s boundaries in northwest Mexico.

True to its reputation, San Blas did not disappoint when it came to the diversity and number of bird species we encountered during the CBC. Our little team found 62 species during 4 hours of birding La Bajada and the nearby La Palma to Tecuitata road, including the secretive Sinaloa Wren, the endemic Rusty-crowned Ground-Sparrow, the rarely-seen White-collared Swift, and Black-and-white Owl – a life bird for Tonio. My personal favorites were the Elegant Trogon, Cinnamon Hummingbird, Masked Tityra, and Black-chinned Hummingbird. All told, the San Blas CBC teams encountered 283 species of birds. Six species of owls were found, including the secretive Vermiculated Screech-Owl, discovered in a new location and habitat for the San Blas area. This new piece of information suggests that this bird may be much more abundant than previously thought, underscoring the value of the Christmas Bird Count as the world’s largest, and longest-running, citizen-science project.

As for Maya, she was most interested in the flowers and butterflies – things she could more easily see and appreciate given her four-year-old attention span. My hope for her is she will also come to love and appreciate birds, and maybe one day, she too will be an ABA Young Birder of the Year and help Mark break the San Blas CBC record. She is well on her way.

This story was originally published in the Sonoran Joint Venture eBulletin. Reprinted with permission.

So eternally grateful for the teachers, administration and founders of El Jardín school. The education, guidance and love Maya has received over the last 7 years has been tremendous. And the view from her desk this year isn’t half bad either! 😂 Ready for another beautiful school year in #chacala! ❤️🌴📚
Tapalpeando baby! I love this Pueblo Magico! #tapalpa #jalisco #mexico #mexicolindo #tapalpeando Never been? Read my post from our last visit in Nov. (link in bio)
Amazing Misty Fjords National Monument! #alaska
Mama’s ultimate happy place: book, binos and a great view! Thank you Misty Fjords for a fantastic experience! #alaska #mistyfjords
OMG Dawes glacier! Words cannot describe the beauty and power I witnessed today.