After two amazing months on the Baja California peninsula, it was time to head to the mainland to our new home in Chacala, Nayarit. We were both anxious and nervous about this next part of our journey. We were about to move to a town that we had never seen before. All we knew about Chacala was what we could find online. Chacala is really small, so there isn’t much about it online. What if we don’t like it? What if the house we rented wasn’t as nice as the photos made it look? What if the town was too small for us? What if Maya didn’t like her new school? What if one of us got dengue fever or, worse yet, chikungunya – nasty, mosquito-born illnesses that are a serious problem in parts of Nayarit?

We started to let our fear cloud our thinking, and we grew more and more anxious the closer we got to our departure date. On top of that, we were originally scheduled to cross the Sea of Cortez by ferry when Hurricane Patricia – at the time predicted to be the most powerful hurricane to ever hit the Western Hemisphere – was forecast to hit the Nayarit coast.

We pushed our fears aside, took a leap of faith that everything was going to be ok, and changed our ferry tickets to depart a week after Patricia made landfall. We crossed over on Oct. 31, Halloween night. (We really like to test fate, huh?). The actual ferry ride was smooth sailing, but it was a real kerfuffle organizing our voyage.

We bought our tickets in La Paz several days ahead of time, thinking that would be a smart move so we would have less to deal with on the night we were departing. We were taking the overnight ferry leaving at 11pm, so we wanted to get on the boat and get to bed asap. The first ticket office we went to in La Paz couldn’t sell us tickets because we didn’t have an import permit for our car. Permits could only be purchased at the ferry terminal, which was a 45 minute drive away in a totally different town. We didn’t actually have our car with us that day. We had left it on Mogote and taken the water taxi across to La Paz, so we couldn’t get the permit that day anyway. Ugh. Score: 1 ferry kerfuffle.

The next day, we drove all the way around Mogote and La Paz to the port of Pichilinque to get our permit and tickets (1.5 hours). Getting the vehicle permit was a breeze, but trying to actually buy tickets was a quagmire. The woman at the ticket counter told us to go to customs (outside the terminal in a totally different building). When we got there, the customs agent told us to go back to the ticket counter. Ugh! We were stuck on what to do next. We held out for an English-speaking customs agent, who told us to get in line with all the other vehicles departing that day to have our car inspected and weighed. That took another 2 hours, during which we had to gently but urgently explain (in Spanish) we were NOT DEPARTING TODAY, but in four days, to make sure they put down the right date on the very important form that allowed us to buy tickets. We finally got the tickets and drove back to La Paz. Score: 2 ferry kerfuffles.

Then, of course, a few days later, we freaked when we heard about Hurricane Patricia and went back to ticket office #1 in La Paz to delay our departure by a week. Score: 3 ferry kerfuffles.

On the actual day we left, we STILL had to get in the same customs line to weigh and inspect the car, so we saved absolutely NO TIME buying tickets ahead of time. Score: 4 ferry kerfuffles.

Well, we finally DID make it to the mainland. On the morning of Nov. 1st, we docked at Topolobombo in Sinaloa – about a 10 hour drive north of Chacala. We decided not to make the drive all in one day, and instead broke it up with a stop in Mazatlan for a few days, about 5 hours from Chacala.

We were only 15 minutes on the road after leaving the Topolobombo ferry terminal, when a federal police officer snared us in a bogus speed trap. He said we were going 75 (kilometers/hour), when we know for certain we were going under 60 (the speed limit). We were able to get away with a 200 peso “fine” that went straight in the officer’s pocket. While we were definitely the victim of a shakedown, the whole exchange was surprisingly non-threatening and, dare I say, pleasant. We received no hassle, no gruff stuff or attitude at all from the officer. It definitely helped that when we were negotiating price, we rolled down the back window to show him Maya. He was immediately taken by her pretty blue eyes. Originally, the fine was going to be around 900 pesos. Good job, Maya!

I mean, how could you resist this face?

With our first (and hopefully last) shake down under our belts, we were on the road again. The drive down Sinaloa reminded us of driving through central California – miles and miles of farm fields and fruit tree groves – but without the drought  conditions. The fields and groves were green and lush, unlike the sadly desiccated farmland of California that we had driven through just three months prior. We pulled into Mazatlan in the late afternoon and were floored with just how HUGE it is. Mazatlan is at least six times bigger than the biggest city we visited in Baja (Cabo San Lucas). We were used to rolling into town and finding our way around pretty easily. It took us several spins around the city to finally find our hotel, Casa de Leyendas.

Casa de Leyendas was a beautiful boutique hotel steps away from the malecon and beach – a real splurge for us. It turned out to be money well spent because I came down with a stomach bug and spent almost all my time in the room during the two days we were in town. I took a few slow walks around the beautiful Plaza Machado and malecon – but that was about it for me. Brian and Maya did some exploring on their own, checking out the festive altars and decorations set up for Dia De Los Muertos. Ironically, it was while visiting Mazatlan 25 years ago that I got sick too – but that time it was due to too many margaritas at Señor Frog’s. 🙂

On Nov. 3, we were on the road again destined for Chacala. The farther south we drove and the closer to Nayarit we got, the more lush the landscape became. Palm, banana and mango trees popped up around every corner. Strangler figs wrapped themselves around every tree. I thought southern Baja was lush. This was paradise! 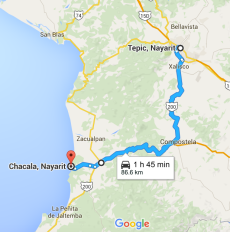 After we crossed into Nayarit, we headed high up into the mountains toward the city of Tepic. Then came the super curvy descent down to the coast from Compostela. Then, finally, we turned west from Las Varas onto the 10-kilometer road through the jungle to Chacala.  We had finally made it to our new home.

And what, you may ask, did we think? Was it what we were expecting? To answer those questions, stay tuned for my next blog post!

One of the many reasons why I love Mexico is - agua fresca - fruit water made with all different types of fruits, flowers, grains and more. Here we are enjoying agua de jamaica (hibiscus flower). Nothing beats the summer heat like a big pitcher of agua fresca! #whyilovemexico #mexicolindo #lasvaras #nayarit #mexpat
Little Jurassic visitor yesterday! #junlgelife #chacala #mexico #iguanasofinstagram
Some scenes and sounds from the first ever Pride parade in Las Varas, Nayarit. It was so wonderful to see so many people and youth come out to celebrate the rights of LGBQT people and everyone to be who they are and love who they want. 🏳️‍🌈❤️🇲🇽 #pride #lasvaras #mexico
Celebrating our anniversary in style! Cheers to us for 19 years of marriage and 30 years of friendship, love and adventure! I love you Brian!
Nothing says Mexico like giant bags of Cheetos and a crate of mangoes! #YoAmoMexico
We just wanted to thank and recognize some of our sweet family and friends who have purchased a copy of Maya’s and her grandparents’ new book, The Green Gang. Looks at all those happy readers! We are excited to announce that the book is now available in Spanish — “La Pandilla Verde”. You can purchase either Spanish or English versions in ebook or paperback formats on Amazon. All proceeds go to support Maya’s school El Jardín, a nonprofit K-8 that serves the majority of children in Chacala. Link in bio for more info. Gracias! #childrensbooks #kidsbooks #bilingualbooks #spanishbooksforkids #chacala