The double rainbow that greeted us at the entrance to our home in La Paz proved to be a message from heaven that the next two weeks were going to be magical.

We arrived in La Paz on Oct. 18, not really sure what to expect of the capital city of Baja California Sur. We were invited to stay at a friend’s home on El Mogote – a small peninsula at the end of a long, narrow sand bar that juts out into the Sea of Cortez, cutting off the peninsula from town. The only way to get to El Mogote from La Paz is via a bumpy dirt road that runs along the sand bar (40 min), or via water taxi from downtown La Paz (10 min). Since we had our own car, we opted to drive into El Mogote, leave the car there, then use the water taxi to get back and forth to the city when we wanted. 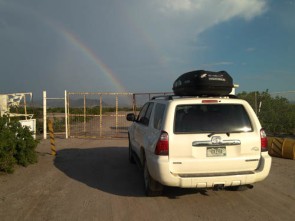 Bumping along the dirt road on our first approach to El Mogote, we weren’t sure what we were getting into. The road was narrow with deeply eroded sections and sand-filled ruts. We let out some of the air in our tires to avoid getting stuck in the sand. At the end of the road is a chain link fence and a phone number to call to summon a security guard to let visitors onto the peninsula. As we neared the gate, a double rainbow arched over the Sea and La Paz. Surely this was a good sign. We made the call, the gates were opened, and we found ourselves in a private, secluded development of ranch-style homes and high rise condos set alongside an 18-hole golf course and bordered by endless shoreline. The house we stayed in was just steps away from the golf course and a short walk to the sea.

It was great to be in a home where we could spread out, have more privacy (we’ve all been sharing one bedroom for most of the trip), and prepare home cooked meals. The whole residential development was probably less than 20% occupied when we were there, mostly with snow birds from the U.S. (many from Colorado!) and Canada who have made El Mogote their winter home. We met a ton of friendly and fit retirees during our stay. One particularly fit woman (from Boulder, of course!) was a yoga instructor and led a class three times a week on the pool deck. I was thrilled and took as many classes as possible; I had been craving a real yoga class since leaving my beloved Yoga Junction in Louisville, Colorado. Watching all these tan, healthy seniors walk the beach, swim, do yoga, golf, and jog was inspiring. This is the kind of retirement lifestyle Brian and I hope to have one day. 🙂 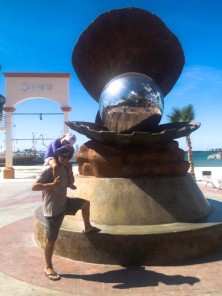 La Paz turned out to be one of our favorite destinations in Baja. There is so much to see and do along the Sea of Cortez here, and the town is fantastic too. We loved exploring the central mercado, tiendas and malecon. The malecon was the longest and prettiest seaside walkway we have seen yet – stretching at least 4 miles with lovely white metal benches you could sit on, playgrounds, and sea-themed sculptures every few hundred meters. The biggest sculpture – a giant chrome pearl in an oyster shell – paid homage to the world’s largest pearl that was found on nearby Espiritu Santo Island – the 12th largest island in Mexico at 32 square miles.  We were told the island was a must-see, so we booked a tour that included snorkeling with the island’s resident sea lion colony, visiting a frigate bird colony, and lunching on one of the island’s crystal clear beaches.

Crossing from La Paz to the island was a wet and wild adventure on a small speed boat that carried us, 6 other passengers and 2 guides. The current was strong and the swells were big, and we bumped and splashed along the most protected side of the island for about an hour before we arrived at the frigate bird colony. Hundreds of birds made their nests on this former pearl farm set in a shallow cove of crystal clear water. It must have been mating season as the males were puffing out their big red chests. The females didn’t seem to notice. Birds swooped and squacked all around us. We had never seen so many frigate birds at once!

After visiting the frigate birds, we motored back out to the choppy, open water and continued bounding north to the tip of the island to visit the sea lion colony. You could hear them before you could see them, barking up a storm. There are more than 300 sea lions that live on Espiritu. Tourists can snorkel or SCUBA dive right next to them. We had the great fortune of snorkeling among these amazing, graceful “sea wolves” as they are known in Mexico. We took Maya with us and she floated along in her life vest beside us. The water was so clear, she could see the sea lions as well as the handful of SCUBA divers that were swimming below us. Dozens of sea lions lazed on the rocks and slid into and out of the water all around us. It was amazing!

Check out this video of sea lions swimming around my and Maya’s legs!

One of the things I love best about the Sea of Cortez is how clear and blue the water can be. All up and down the coast, from Bahia de Los Angeles, to Bahia Conception, to Loreto and now in La Paz, we had the great fortune of swimming in water that is so turquoise it looks like a glacial lake, and as clear as a plate of glass. Just to give you an idea of just how clear and blue the water is, here’s a video of Maya playing in her inner tube at Tecolote beach in La Paz. You would think she was in a pool until the camera shows you the full 360-degree view of the ocean. 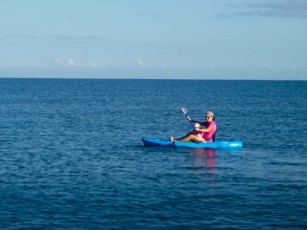 We pretty much spent part of every day in the water when we were in La Paz – in kayaks, on paddle boards, snorkeling, or just wading on the shore. One morning, we took a kayak and paddle board out on a mission to see a whale shark. The whale sharks congregate in the sea around El Mogote. Tourist boats would head out from La Paz over to El Mogote every morning in search of these amazing giant fish. They would stop about a mile down shore of the residential development and putter around following the whale sharks. We wanted to see whale sharks again so badly after our magical experience in Bahia de Los Angeles. On a previous morning, we had tried on kayaks to catch up with the tourist boats, but never made it that far (although we did see a bunch of sea turtles).

On our second try, we were even more determined. We paddled slowly and surely toward the boats. Every time we almost caught up to them, they would speed off again! This happened 2-3 times. On the fourth try, we were almost to the boats, but still several hundred yards away, when a massive dark shadow passed by within a few feet of my board. A whale shark! I turned the board to follow it, yelling at Brian and Maya who were in the kayak to follow me. We had found a whale shark on our own! Or rather, it had found us. We tailed it for the next 30 minutes, paddling gently alongside it as it slipped below the surface of the water and back up again several times. Pretty soon, the tourist boats were following us. 🙂 Seeing a whale shark up close and personal is a thrill I will never grow tired of. We are so lucky to have seen them twice on our adventure through Baja. 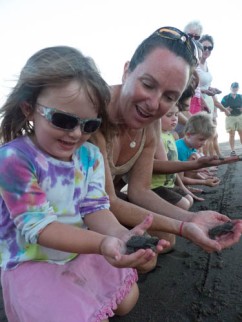 The final thrill of our time in La Paz was to participate in a sea turtle release on El Mogote. The El Mogote shoreline is a nesting site for Olive Ridley and Leatherback sea turtles. Female sea turtles make their nests on the beach, lay their eggs and then abandon the nests. When the eggs hatch, the tiny turtles have to waddle as fast as they can to the sea and avoid predatory birds, animals, and sadly, people. Needless to say, many get eaten before they hit the water (and even before they hatch). Volunteers monitor the beaches, find the nests, and collect and incubate the eggs until they hatch, and then release them into the sea. I’m not sure what kind of sea turtles we helped release, but it was a thrill nonetheless – especially for Maya!

Up next: Goodbye Baja, Hello Mainland!